The origin of the brand name, Collections Xaragua 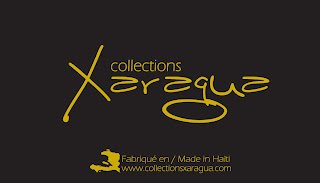 The origin of the brand name, Collections Xaragua, comes from Haitian history. It is my way to pick everyone's curiosity so they can learn about Haiti, when it was called Hispaniola.

Before the slaves were brought to the country, Haiti was a peaceful and beautiful country, inhabited by the natives (called Indians by Christopher Colombus).

Xaragua was one of 5 and the most popular and strongest of the chiefdoms of Hispaniola, it was a chiefdom in which 2 of the most influential caciques were a brother and sister, Behecchio and Anacaona. Xaragua was in the southwest peninsula. They grew lots of cotton here and also in the cul de sac, north of where Port‑au‑Prince lies today. It was full of peaceful Tainos that were very peaceful but were killed due to trickery and hate. When Bartolome ordered the abandonment of the previous capital at Isabela in 1497 the then mayor, Francisco Roldan objected. He marched against the fort at Concepcion de la Vega, intending to capture it and take control of the northern goldfield. Unable to do so, he and his followers fled across the central mountains and took refuge in Xaragua. Chief Behecchio and Anacaona received them peaceably and granted them asylum. Now even though Francisco Roldan was part of the problem the natives still accepted them, using their arrival as a pretext to abandon the system of tribute that had been imposed by the colonial government. When Columbus returned from Spain in summer of 1498, he placated Roldan by authorizing him to attack the natives and divide them among followers to use as forced laborers at the goldfields.  Despite them giving him refuge, Roldan followed orders and this action has become known as "repartimiento".

Nicolas de Ovando, who succeeded Bobadilla in 1502, brought along 2,500 colonists, including the first European families to arrive in the Americas. A thousand men of these colonists are said to have died while prospecting for gold. Others established farms, devoting them primarily to livestock, for Spanish crops did not flourish. Ovando felt it necessary to remove the threat to the new settlers that was posed by the surviving hierarchies of caciques at either end of Hispaniola. He accomplished this task by eliminating the principal caciques, first in the southeastern chiefdom of Higuey and then in southwestern Xaragua. Behecchio's sister was Anacaona, widow of Caonabo. After the Spanish killed Caonabo and Behecchio, she became the main influence in Xaragua and was much loved by her people. However, the Spanish were threatened by this popularity and the power that went with it especially with a woman having such status which went against their beliefs and ability to control the natives. They proceeded forcefully and with great brutality. Soon after his arrival in 1502, the Higuey Indians rebelled to avenge the killing on one of their chiefs by a Spanish attack dog. Ovando rounded up six or seven hundred of them, put them in a chief’s bohio, or house, and had them knifed to death. He then ordered their bodies to be dragged into the adjoining plaza and publicly counted.

In the fall of 1503, he paid another formal visit to Xaragua, where he was well received by Anacaona. Ovando, a successor to Columbus, went to her village under the pretext of collecting the Spanish tribute. Despite Anacaona's instructions to the people to be fully cooperative and hospitable, and despite her own friendly welcome, the Spanish began a slaughter, burned the village and took Anacaona prisoner. She convened a meeting of some eighty-district chiefs in her bohio, whereupon Ovando ordered his soldiers to block the door and burn them alive. She was hung at Santo Domingo in deference to her rank. No reason was given for these actions, which destroyed the last independent chiefdoms in Hispaniola.

Collections Xaragua
Collections Xaragua is a company that creates, develops, and produces handbags made of a mixture of fabrics and straw. Our products are handcrafted and reflect our traditional use of straw, siam and the savoir-faire of Haiti to create a variety of innovative styles. The fabrics are carefully selected for their quality and durability. The colors are selected according to international trends, while keeping an eye on local demand. All our bags have their lining made from a fabric that plays a big part in Haitian history, siam. To encourage the Haitian economy, the fabrics are purchased from local suppliers in Haiti. The woven straw is made by artisans in the South of the country, where the straw originates. Once woven, the straw is treated against bugs and a varnish is applied to give it a shiny look. The elegant women who wear this coveted brand are proud to be ambassadors of such an original style. Collections Xaragua’s handbag is not only a symbol of fashion but also a membership to an exclusive club. It is a "must-have"! Proudly manufactured in Haiti, Collections Xaragua, a matter of style...